" The visual system of vertebrates has greatly contributed to our understanding of how different molecular mechanisms shape adaptive phenotypic diversity. Extensive work on African cichlid fishes has shown how variation in opsin gene expression mediates diversification as well as convergent evolution in colour vision. This trait has received less attention in Neotropical cichlids, the sister lineage to African cichlids, but the work done so far led to the conclusion that colour vision is much less variable in Neotropical species. However, as only few taxa have been investigated and as recent work found contradicting patterns, the diversity in meotropical cichlids might be greatly underestimated. Here, we survey patterns of opsin gene expression in 35 representative species of Neotropical cichlids, revealing much more variation than previously known. This diversity can be attributed to two main mechanisms: (i) differential expression of the blue-sensitive sws2a, the green-sensitive rh2a, and the red-sensitive lws opsin genes, and (ii) simultaneous expression of up to five opsin genes, instead of only three as commonly found, in a striking dorsoventral pattern across the retina. This intraretinal variation in opsin genes expression results in steep gradients in visual sensitivity that may represent a convergent adaptation to clear waters with broad light environments. These results highlight the role and flexibility of gene expression in generating adaptive phenotypic diversification "

Reference in bibliography for species (35) 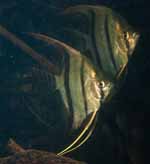 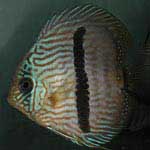